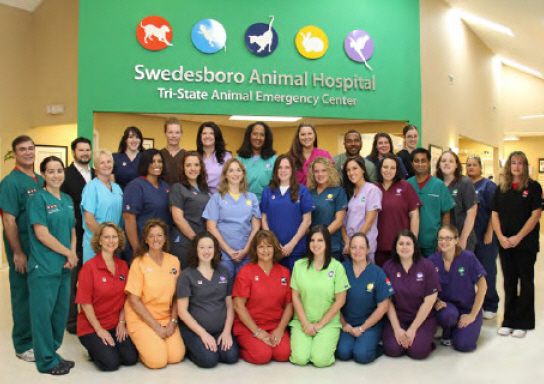 Going Paperless While Preparing for the Future

Like many practices, Swedesboro Animal Hospital recognized the future of veterinary record keeping is in eliminating paper. The challenges they faced in making that transition was to not have the staff slowing down, still meeting the demands of a multi-disciplinary practice in areas such as integration and task management, and doing so in a way that allows for future growth.

Swedesboro Animal Hospital, and its sister hospital Tri-State Animal Emergency Center, is an 8-doctor, full-service 24-hour practice in southern New Jersey. The practice was recently selected as a Top 5 Finalist for AAHAâ€™s Practice of the Year in 2012. Founded in 1986, the hospital has grown from a tiny, single-room building into a modern, sprawling facility that now encompasses seven exam rooms, two surgical suites, and Divisions of Emergency and Critical Care, Oncology, Rehabilitation and Pain Management, and Surgery.

â€œWe owe our selection as a Top 5 Finalist for AAHA Practice of the Year in 2012 in large part to VIA, because it allows us to make technological strides while enabling us to focus even more on what matters most â€“ our relationship with our clients.â€

Swedesboro Animal Hospital and Tri-State Animal Emergency Center are helmed by Dr. Mark Magazu, Chairman and Medical Director, who has more than a quarter century experience working with small animals. Dr. Magazu’s son, Mark, Jr., a graduate of Columbia University and Georgetown University Law Center, is Hospital Director, responsible for the overall growth and management of one of the region’s largest hospitals.

Goals We Wanted to Achieve

1. Full integration of the practice – The ability to call up radiographs, ultrasounds and patient files not only throughout the practice, but on iPads and laptops outside the practice.

2. No Paper! – Paper was overrunning the practice — and slowing it down. The costs were out of hand, and management of tens of thousands of paperÂ filesÂ was consuming not just time, but entire rooms for storage. VIA allowed us to go paperless within one month of installation.

3. Ability to run multiple business centers – All of which need their own ‘engines’ to grow as well as to maintain order and organization. Doing so through VIA, allows Swedesboro to keep transactions separate and organized, as well as to run critical reports to ensure growth, compliance, and a streamlined inventory system.

4. Future growth – Swedesboro was looking for a software system that was built to grow and tackle future challenges, even ones we could not envision today. â€œWe chose VIA because we felt comfortable that, as a company and as a software, it was prepared to grow into new areas of practice management as innovations occurred over time.â€

“We needed an engine that would power our practice into the future,” commented Mark Magazu, II, Hospital Director at Swedesboro Animal Hospital and Tri-State Animal Emergency Center. “At any given time we’ll have multiple divisions of the practice operating simultaneously â€“ surgery, appointments, treatment, grooming, boarding, the pet supply store â€“ as well as multiple diagnostic elements, from radiography to ultrasound to endoscopy. We needed a system that could process and organize every area of the hospital so that everyone in the building can know exactly what’s going on, what their role is, and what needs to be done. VIA is the engine we chose to deliver that information.”

“We considered three other prominent practice management software solutions, all of which had very significant strengths. In the end, we felt that VIA’s interface was the simplest to learn and easiest to navigate. And VIA offered us something else: the ability to grow into new and exciting areas of practice management.â€ Built on Microsoft SQL Server database, VIA has been able to expand at Swedesboro in order to utilize voice recognition software to populate the system when aÂ client calls. Magazu goes on to say, â€œThese and other areas of innovation are unique in my eyes, and really make VIA the engine for our practice that is constantly evolving.”

The doctors hated the idea of going paperless. They couldn’t imagine life without a paper file in their hands. They feared the computer and the notion that they’d have to use it to conduct their exams. â€œTake anything elseâ€, they’d tell management, â€œbut don’t take our paper files!â€

VIA’s training and integration period was seamless and smooth. Swedesboro Animal Hospital and Tri-State Animal Emergency Center went paperlessâ€¦cold turkey! One day there were 20,000 files, and the next day they were gone. Each of those files was scanned into VIA and attached to each patient file, so doctors still have access to critical information from visits past, but all new information was to be entered into the VIA files. â€œWe accomplished this without incident, and very quickly. Even the older (or shall we say ‘more experienced’) doctors now love the system and get along just fine with it.â€

To help with that transition, some of the surgeons utilize voice recognition software allowing them to simply dictate their medical notes directly in to the patient file located in VIA. Finally, any issues that we’ve faced regarding VIA’s implementation have generally been handled swiftly and with success.

How has VIA Helped Our Practice?

â€œVIA has become the ‘engine’ we needed. We use iPads to check customers in, take payments by credit card, look up patient records and review images. We’ve implemented a state-of-the-art inventory management system that integrates with VIA, which will save the practice six-figures in just our first year utilizing these tools.â€

Every ward utilized VIAâ€™s electronic whiteboard that show patient locations and what their assigned tasks are. VIA collects patient information directly from the Idexx in-house lab, with the Antech reference lab, and with their Sound-Eklin radiography systems. â€œVIA has helped us streamline our practice and reinvent our methods of service from the ground up. We’ve saved money by going paperless and by streamlining our inventory. We are able to focus on the client more now that we have records at our fingertips, without having to find and sort through paper records. We can communicate with clientâ€™s better using iPads and third party resources, such as LifeLearn and Dia. Doctors have more information at theirÂ fingertips, whether reviewing DICOM images from ultrasound, radiography or endoscopy, or reviewing old SOAP notes with the ease of a quick click.â€

â€œOn the whole, VIA continues to evolve into the powerful ‘engine’ that makes every part of our practice move into the future. We owe our selection as a Top 5 Finalist for AAHA Practice of the Year in 2012 in large part to VIA, because it allows us to make technological strides while enabling us to focus even more on what matters most â€“ our relationship with our clients.â€

VIA Information Systems is a leading provider of veterinary practice management software and has served the veterinary community since 1999.

VIA is a VCA Inc. company and part of the Mars family of companies. VCA is an animal healthcare company consisting of 25,000 team members providing a nationwide network of animal hospitals and solutions for diagnostic imaging, veterinary hospital information software, and clinical laboratory services.

Click here to assign a widget to this area.